While on a photographic expedition to Antarctica in December of 2017, two wildlife photographers had a visit to remember with a group of baby elephant seals.

While a woman named Jess is lying on the sand to take photos of some penguins in the distance, an elephant seal calf decides to get a close-up view himself! 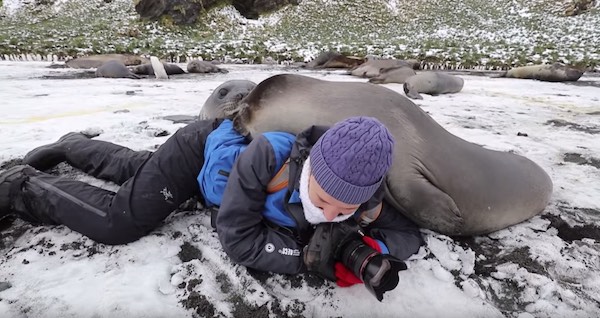 Jess’ husband wrote about the experience on YouTube and shared with ViralHog:

“My wife and I are wildlife photographers. I shoot for Australian Geographic magazine. 10 years ago, we started photo tour company, taking small groups of enthusiast photographers to the most amazing wildlife experiences in the world including Kenya, Galapagos, Amazon, Patagonia, Iceland, Greenland, Christmas Island, Alaska and others.”

“Last summer, we ran our first photo tour to Antarctica and South Georgia, which was amazing. It was while we were ashore in South Georgia on this huge gravel beach filled with King Penguins and elephant seals, that Jess laid down on the ground to get some cool low-angle shots of some passing King Penguins, when suddenly one of these huge baby elephant seals flopped over to investigate Jess, and was soon joined by another.”

And it wasn’t just one baby seal either, one, two, three seals surrounded her. 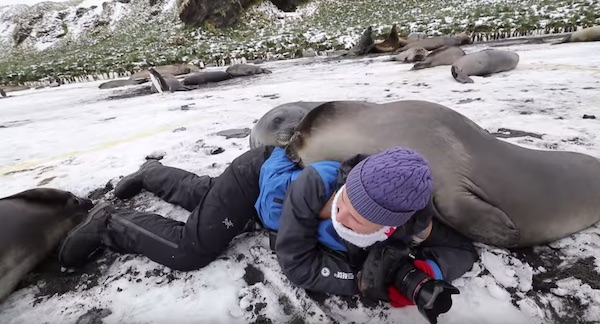 “Before she knew it, she was being squashed by several of these 100kg+ adorable animals, snuffling, burping and sniffing all over her. The hazards of being a wildlife photographer!”

But from the looks of things, Jess didn’t mind one bit. 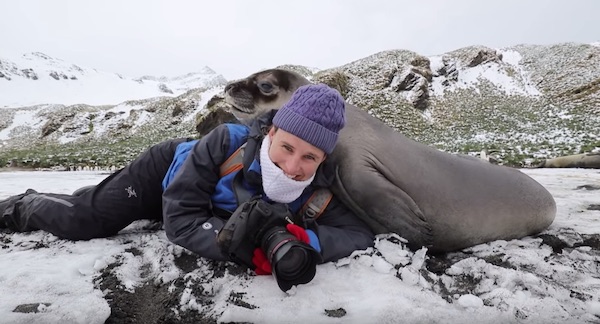 He added that the exact same thing happened to him and a few of their guests. I’m guessing the baby elephants were particularly curious that day!

He also explained that they did not approach the animals.

“You’re not allowed to go too close to the wildlife of course, but it’s a different story when they come up to you!”

And if you are wondering if Jess got out from under the heavy baby seal? Yes, she did, her husband reveals. She “managed to extract herself from underneath these guys and escape.”